Musings on a Saturday Afternoon 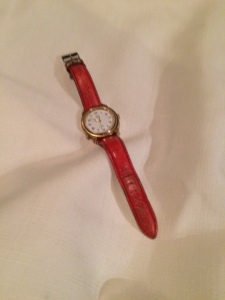 Musings on a New Years Eve afternoon regarding watches (yeah, ho-hum, watches): Anyway, another year has gone by without me buying one. I look at them, however, every year. The latest issue of Men’s Health had 6-8 ads on the very topic — with each watch apparently a precision instrument, finely crafted to…well, tell time. I think.

Breitling has one that looks pretty cool. Within the crystal are three mini-timepieces. I guess one would be a stopwatch. I don’t know what the others are for, maybe corresponding time in Rio and Peking. This watch is interesting in that it’s “water-resistant to 1650 ft.” Now, this may come as handy-dandy news to the 3% of us who dive, but for the other 97% of us, I fear that under 10 ft of water we may have more on our minds than the depth rating on the stupid watch, which, at a pound or two in weight, is what pulled us under. Price $13,000.

Bulova makes a nice watch. It looks as heavy as the Breitling, but this one “…produces a vibration frequency of 262.144 kilohertz (kHz).” I’ve no idea what that means. But I would think that information, impressive as it sounds for bragging purposes, and possibly the watch’s main selling point, might be difficult to work into most casual conversations, as not many, that I recall, allow segue-room for kilohertz. So, all in all, the fancy vibration frequency may end as little more than a mute point. No Price listed

I like this one. It’s the Victorinox watch, made by Swiss Army. And the best part is that it’s for Him or Her. Here’s the beauty of it: “…named after the alpine helicopter base of the Swiss Air Force and directly inspired by the famous twin-roter Cougar AS 532 helicopter.” And, “…key elements borrowed from the helicopter’s rotary blades, cockpit cyclic stick and turbines.” Oh yes! I can almost see her eyes light up and the flutter of her heart, as though tickled by the fingers of fluffy white clouds, as she opens the box and slips this baby on. Just…just as long as she’s mindful of the whirling blades. Price $2,450.

The point to all this (I guess) is that I don’t wear a watch and am still looking. Although, for some reason, I might wear one if it had a red band, strange as it may seem. But rather than a watch that can jump, and run and play quietly by itself when not on the wrist (as surely is the wave of the future), I’m looking for one to tell time.