This is the ninth letter. Even though it closely follows the previous letter, I didn’t receive it until late January. I have no idea why.  // As before, this piece is un-edited, the names have been changed, and the State intentionally omitted.

I know this is coming late, but I do hope you had a good Thanksgiving! This is Betty Jo Sprigger writing from Hog Swallow. I sure hope you don’t mind me asking for advice once again. It’s sorta like asking you to take another spin on the merry-go-round of my life, but you’re very special to me and Bobby Lee. Especially because you listen, and just maybe, even care a little.

Well, knowing BL wrote to you about what happened on Creedy’s Hill (Whoohoo! It was the best night I ever had!), I just wanted to let you know what went on afterward. Believe it or not, Jug has a reward posted for information leading to the “identification and pulverizing” of the Outlaws. He and some of his friends on the football team even took a mind to bully a few kids for information. Topping the hog-snout stew, Fuzzy was included. They threatened him with a beating unless he confessed and squealed on me and Bobby Lee (Jug’s still believes it was us on the hill). But Fuzzy’s kind of different now. Three weeks ago he’d have caved like an igloo in Hawaii, but ever since Halloween he’s been more confident (he lost some weight lugging water up Creedy’s hill, and now Mary Sue is extra friendly with him). Anyway, they pushed him around for a while, but he never confessed or gave us up. Fact is, Ms. Brown, I think all three of us changed that night. Maybe it has to do with giving ourselves an identity, and finally believing in…well, us. And now, rather than being faceless nobodies tagged by others as dweebs, queers and nerds – we’re the Outlaws! Strange enough, that name is whispered around school like some kind of cool, secret society. Truth is, I believe there’re a lot of nobodies and outcasts like us who’d like to join up. We’ve talked about letting people in, but right now, with the likelihood of them getting beat up, or giving us away (there’s a fifty-dollar reward on our heads), it might not be the best time. What really fixes in my mind is that Jug and his friends haven’t bothered BL since Halloween. Hum…

Image courtesy of vectorolie at FreeDigitalPhotos.net

Sorry, I suppose it’s best to get on with what I wanted to write about (I do tend to prattle, as you’ve probably figured). I’m now allowed to talk with Bobby Lee! My momma still won’t let be date him, but at least I don’t have to sneak notes to Fuzzy anymore like some kind of foreign spy. What happened was, BL decided he’d try once again to weasel his way into my momma’s good graces. Knowing that we were having a big Thanksgiving dinner with relatives all the way from Rabbit Drop, WV, just like last year (remember BL and the flying pea incident?), and even though he wasn’t invited, he thought he’d stop by and drop off a apple pie with a little well-wishing note to my momma. He thought of it himself, and I though it was pretty sweet of him, tell the truth. Well, the thing with Bobby Lee is, and you may have gathered this over the past year, he can be rather…gawky-awkward. I mean, good Lord, the boy I call my boyfriend can trip over a strand of hair! And this time he sure didn’t disappoint. I watched as he parked his car (his momma’s car actually; she was still serving at Ruby’s Diner, where BL would meet her for their Thanksgiving dinner) at the same time my grandma pulled up in the car driven by my cousin, Bo. Bo, of course, made a beeline to the door so as to gobble up the appetizers my momma usually set out, while BL and Grandma walked to the door, her talking about how nice it was to see him again, when yep, you guessed – Bobby Lee tripped on the lip of a sidewalk crack. That’s when the pie went airborne, landed with a plop, the top (with the note attached) came off and spun a few times, and then part of the pie slid onto the concrete. Good gravy!

I sure expected this to be another BL disaster, but then my grandmother went and totally surprised me. You know what she did? She looked at BL, who had dialed-up to three shades of red, looking about ready to cry, and said, “Now, don’t you go fret none, Bobby Lee. Grandma still has a few tricks up her sleeve.” And then she just bent down, tipped the pie plate just so, and, after brushing off dirt and grit with her “shaky” hand, eased that pie right back and replaced the lid, leaving it looking like it never left home. Then she stood, winked at Bobby Lee (she likes him!), patted me on the face, and walked into the house. The best part of Thanksgiving was that during desert she just when on and on about the tasty pie, and about what a nice boy that Bobby Lee was. And after all that, even momma had to give a little. It wasn’t until we were washing dishes, however, that she finally shrugged and told me that she wouldn’t mind if I wanted to talk to BL again. Whoohoo!! 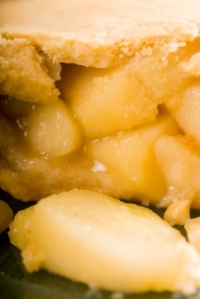 Image courtesy of KEKO64 at FreeDigitalPhotos.net

And this brings me to my questions: Even though I hit Jug, why does it seem he goes out of his way to see me in the halls? Do you think he still likes me? Or is it his way of getting back at BL? Why hasn’t BL been picked on? Does Jug maybe have something else planned for him? Shall I start working on my momma about having Bobby Lee and his momma over for Christmas (she’s really a nice lady, working so hard…and that’s the only day of the year when Ruby’s is closed)? Is anything ever certain in life, or is it just played day to day like a game of chance?